I was extremely privileged in the last several days to have the opportunity to travel to North Dakota as President of the National Sheriffs' Association to see firsthand the protest and the response thereto to the Dakota Access Pipeline Project near the Standing Rock Sioux Reservation about 25 miles south of Bismarck.

I learned first that the pipeline project, which has been in the works for several years, will traverse four states including North Dakota, South Dakota, Iowa and Illinois carrying crude oil. First, I was surprised to learn that a natural gas pipeline is already underground on the same right of way. The DAP has received all federal approvals over several years, and litigation which attempted to stop it in the federal courts has been resolved. Despite this project being very "federal" in nature and clearly in interstate commerce, the Obama administration has refused to provide any law enforcement or other support to North Dakota state and local law enforcement that has placed them in the position of having to enforce the rule of law. As usual, law enforcement is put between a rock and a hard place due to various political agendas.

Based upon sensational news reports, I had the wrong impression that this pipeline was to run directly through the Standing Rock Reservation and would disturb ancient burial grounds of the Sioux Tribes. The argument has evolved now that this pipeline will jeopardize the water supply of the Missouri River (despite the fact that the pipeline will pass under other rivers including the Mississippi throughout its entire route). Also, the Cannonball River which runs throughout the Standing Rock Reservation is actually “upstream” from the pipeline crossing. This false narrative has understandably generated a great deal of sympathy and support from many quarters for the Standing Rock Sioux People.  I quickly learned and saw for myself that this was untrue. The pipeline passes about two miles north of the reservation and that years of archeological study uncovered no significant native historical sites. It is difficult to believe that a single modern pipeline would be more environmentally risky than transporting crude oil by rail or truck through the same territory.

The Dakota Access Pipeline is 95% complete and the construction work near Standing Rock is the last phase which will tie the pipeline together. It is a 3.7 Billion Dollar Project. 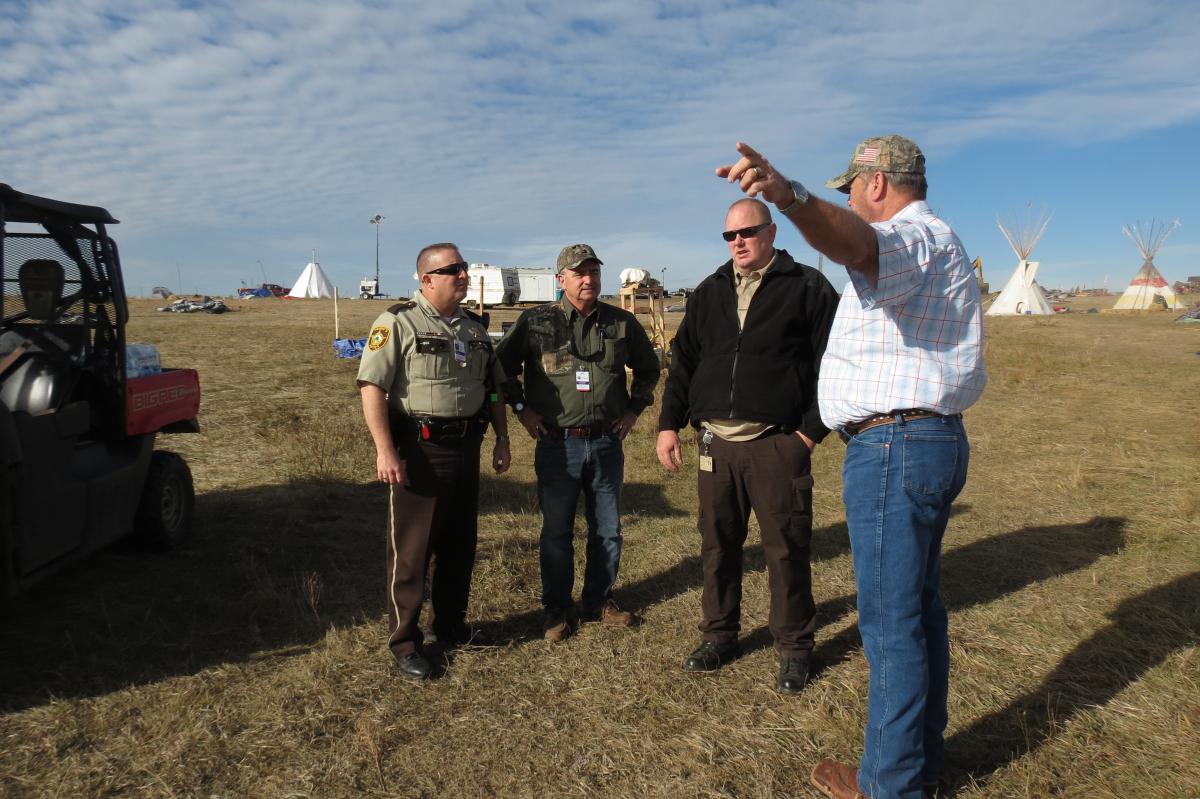 This past Thursday, October 27th, steps were taken the morning before I arrived which evicted protestors from private property directly in the path of the pipeline. This "northern" camp was erected just days before and the occupants had been warned repeatedly for several days that their presence there was unlawful and that eviction was imminent. These warnings went unheeded.  Despite the statements coming from the media and protesters that they were completely peaceful and prayerful, it has been a fact that more militant protestors (terrorists) have destroyed property and physically beaten employees of the company in recent weeks. I personally witnessed and photographed what I estimate to be at least a half-million dollars in damage to bulldozers and excavators.  I further learned that many protestors other than Native American groups have descended upon the area such as anarchists and eco-terrorists who are hell bent on committing violence and damage.  The police presence in the area to protect farmers, ranchers and other private property interests has been costing the state of North Dakota millions of dollars.

The Sheriffs of several states have contributed manpower over the last several weeks to help preserve order and protect property.  On October 27th, law enforcement evicted the trespassers from the north camp on private property about three miles north of the Cannonball River. While pleading with the trespassers for a peaceful move, law enforcement officers were met with Molotov cocktails and various missiles such as rocks and logs being thrown at them causing numerous injuries to the officers. The only discharge of a firearm occurred when a protestor fired at the line of officers. Miraculously, none were hit by the bullets. When the protestors were moved south of the bridge, two trucks used to blockade the roadway were set on fire by the protestors. This action now has very possibly jeopardized the integrity of that bridge. News accounts ironically then decried the use of defensive equipment such as “riot gear” and armored vehicles by law enforcement.

Many media sites reported only that "heavy handed" police tactics were used upon the protestors who were only praying and "peacefully" protesting. These same outlets failed to mention the shooting, Molotov 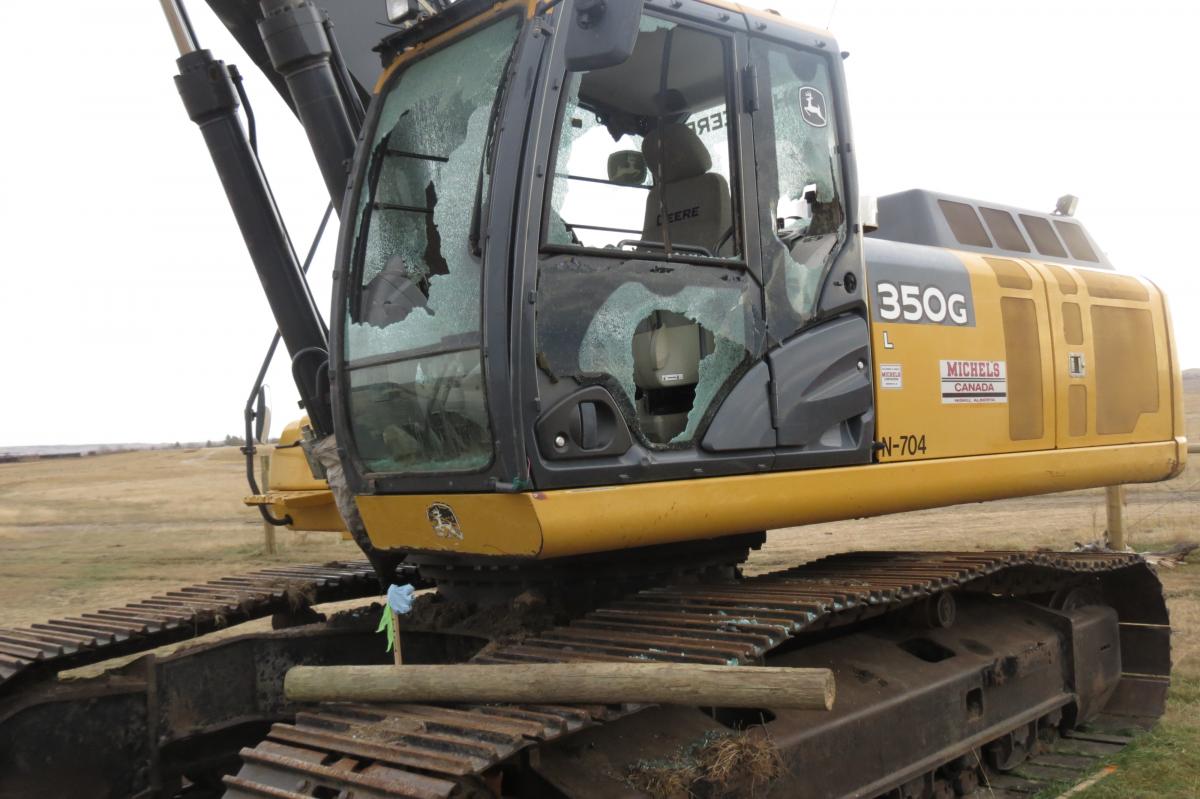 cocktails, and extensive property and equipment damage produced by some of the protestors. The protestors even cut fences and attempted to induce a domesticated buffalo herd to stampede through the area. The owners of the herd, whom I spoke with personally indicated that at least a dozen of their buffalo were killed by protestors.

The next morning, I was present as law enforcement leaders including

Sheriff Paul Laney met with leaders of the tribe. The tribal representatives lamented the violent and destructive behavior of "outsiders" who had come in only to commit violence.  They indicated that they would encourage these violent agitators to leave the camp and protest.

While the entire situation seemed to be de-escalating upon my departure on Sunday October 30th, it remains to be seen if the violence and illegal acts are truly over. I must commend the professionalism and patience of law enforcement officers under the leadership of sheriffs such as Cass County Sheriff and National Sheriffs' Association Board member Paul Laney, Morton County Sheriff Kyle Kirchmeier, and Burleigh County Sheriff Paul Heinert. The North Dakota State Police as well as several area Police Departments also played essential roles. The operation evicting trespassers, some of whom became violent was carried out with professionalism and restraint despite liberal press stories to the contrary. I must also commend the numerous sheriffs’ offices throughout the multi-state area including NSA Executive Committee Member Rich Stanek of Hennepin County, Minnesota who sent personnel to assist with protecting lives and property.

I certainly feel empathy for the Native American peoples of America and especially the Sioux due to the treatment they received at the hands of the U.S. Government in the latter part of the 19th Century.  These Native American Cultures are and should be a proud people for whom we should all have concern.  However, the law and facts simply do not weigh in their favor in this case from everything I've seen. This project went through an extensive approval process over many years and court challenges in Federal Court have failed to be successful.  We are a nation of laws.  Emotion and empathy cannot carry the day. It just seems that opposition to this pipeline is not reasonably based upon legitimate environmental concerns. Energy independence has been one of the major goals of this country for decades. In my home state of Louisiana, we are surrounded by gas and oil pipelines and safely so. In another ironic twist, it is widely known that the Standing Rock Tribal Chairman owns a convenience store and gasoline station on the reservation.

It's time for everyone to move on in reference to The Dakota Access Pipeline and stop putting further strain on the citizens and law enforcement officers of North Dakota and surrounding states.