The Charles "Bud" Meeks Award for Deputy Sheriff of the Year was established to recognize deputy sheriffs who have demonstrated conspicuous bravery in the performance of their duties. There is one awarded for merit and one for valor. 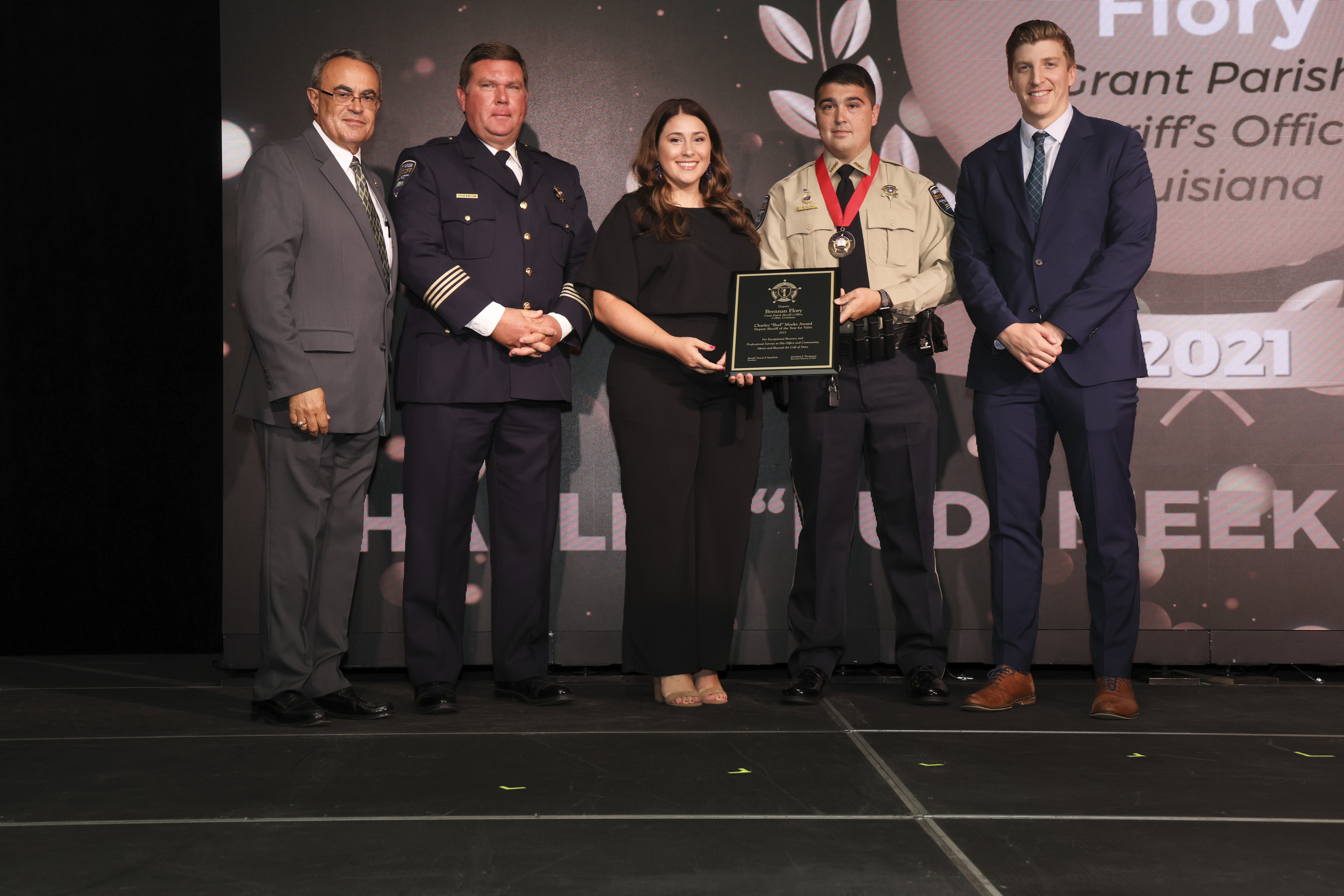 I would like to nominate a Deputy Sheriff for the Medal of Valor and/or the Deputy Sheriff of the Year. Below is information regarding the heroic actions that he took.

On April 19, 2020, Grant Parish Sheriff’s Deputy Brennan Flory was stopped by a passing motorist and told of a possible building that was on fire north of Pollock, La.

Deputy Flory responded and found a home to be fully engulfed in flames. Deputy Flory ran around the house and could hear the moaning of someone. He discovered a woman lying in the threshold of a door and partially on a porch.

Denise Brooks received 3rd degree burns to 80% of her body, but doctors believe that she will survive.

Without the brave interaction from Deputy Flory, I am convinced that she would have not survived the fire. 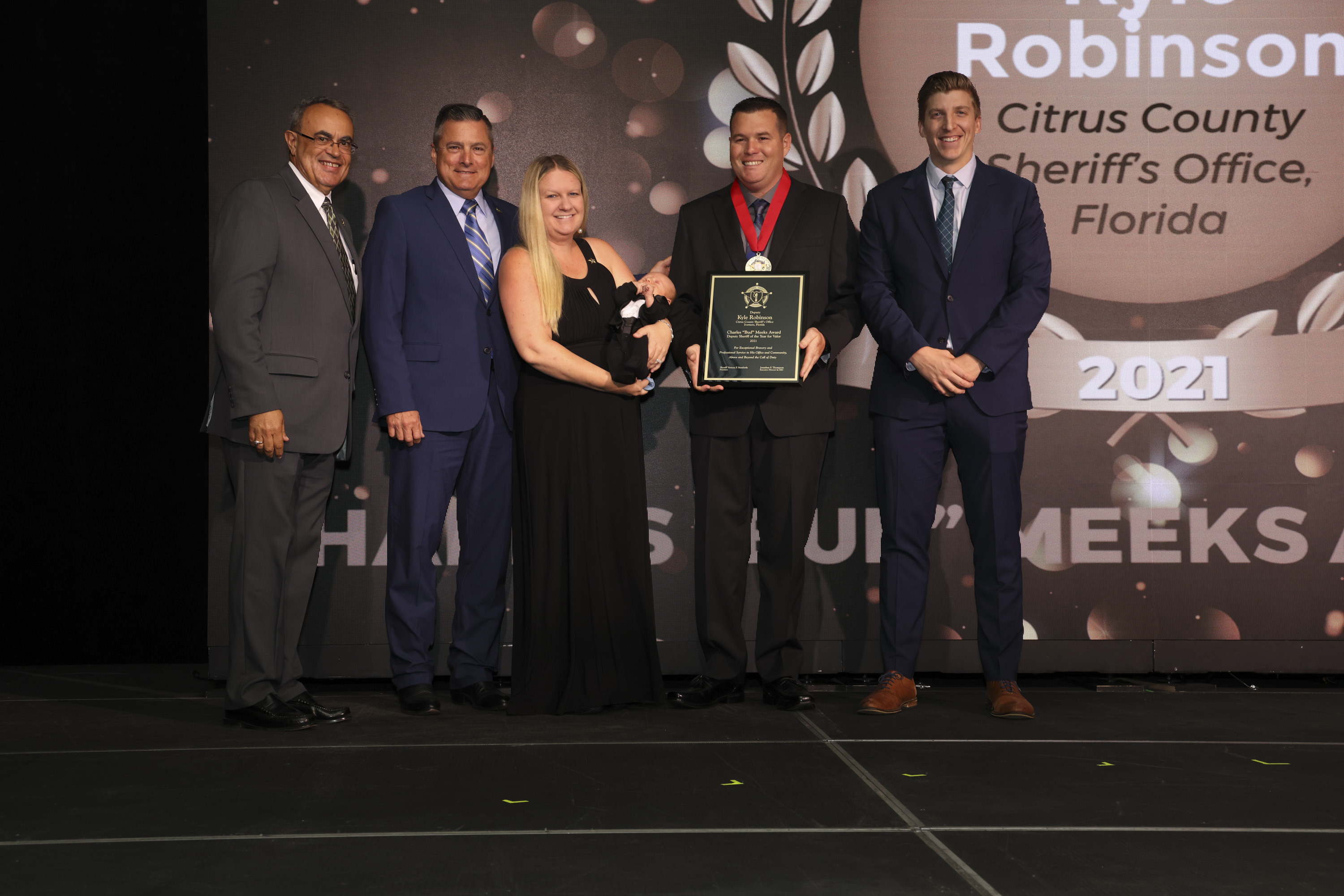 It is with great humility that I nominate Deputy Kyle Robinson. Deputy Robinson's sustained superior performance of outstanding efforts consistently exceed the standards by which excellence is measured.

I am proud to serve alongside him as his Sheriff and hope you choose to recognize him with the Purple Heart Award.

On February 29, 2020, Deputy Kyle Robinson responded to a call for service where a subject was inside the Family Dollar Store in Crystal River, bleeding from his arm and banging on the door. The subject was harassing and scaring customers and the store clerk requested the subject be removed and trespassed from the premises. Upon Deputy Robinson's arrival, he observed the subject on the sidewalk bleeding profusely from a wound on his elbow. Deputy Robinson immediately began trying to establish a dialogue with the subject, offering him first aid and medical attention to assist with the bleeding. It was apparent the subject was having a mental episode, making irrational biblical statements, and stating that he wanted to meet God.

The subject, who continued striking Deputy Robinson in the head, still refused to comply with lawful instructions by continuously yelling that he would kill him. After multiple strikes to the subject s leg with the baton and having no affect at all, Deputy Robinson felt an unknown blunt object strike his head. This caused him to lose consciousness for a few moments. Upon regaining consciousness, Deputy Robinson found himself on the ground with the subject on top of him continuing his brutal attack.

Throughout this altercation, Deputy Robinson never gave up defending himself and protecting his community against an unprovoked attack from a subject that was in ah altered state of mind. Even after he regained consciousness, Deputy Robinson immediately realized the severity of the situation and was able to utilize training tactics to ensure the safety of himself, the subject and the citizens gathered around. It is without doubt that without the physical and mental fortitude shown by Deputy Robinson during this attack on his person, and the clear immediate threat to surrounding bystanders posed by this subject, the outcome of this event could have been drastically different. The subject was arrested and charged with Attempted First-Degree Murder of Law Enforcement Officer, Depriving an Officer of Means of Protection or Communication, Attempted Depriving an Officer of Means of Protection or Communication and Resist Law Enforcement Officer with Violence. Deputy Robinson was treated for his injuries and has since returned to his duties as a Deputy Sheriff. 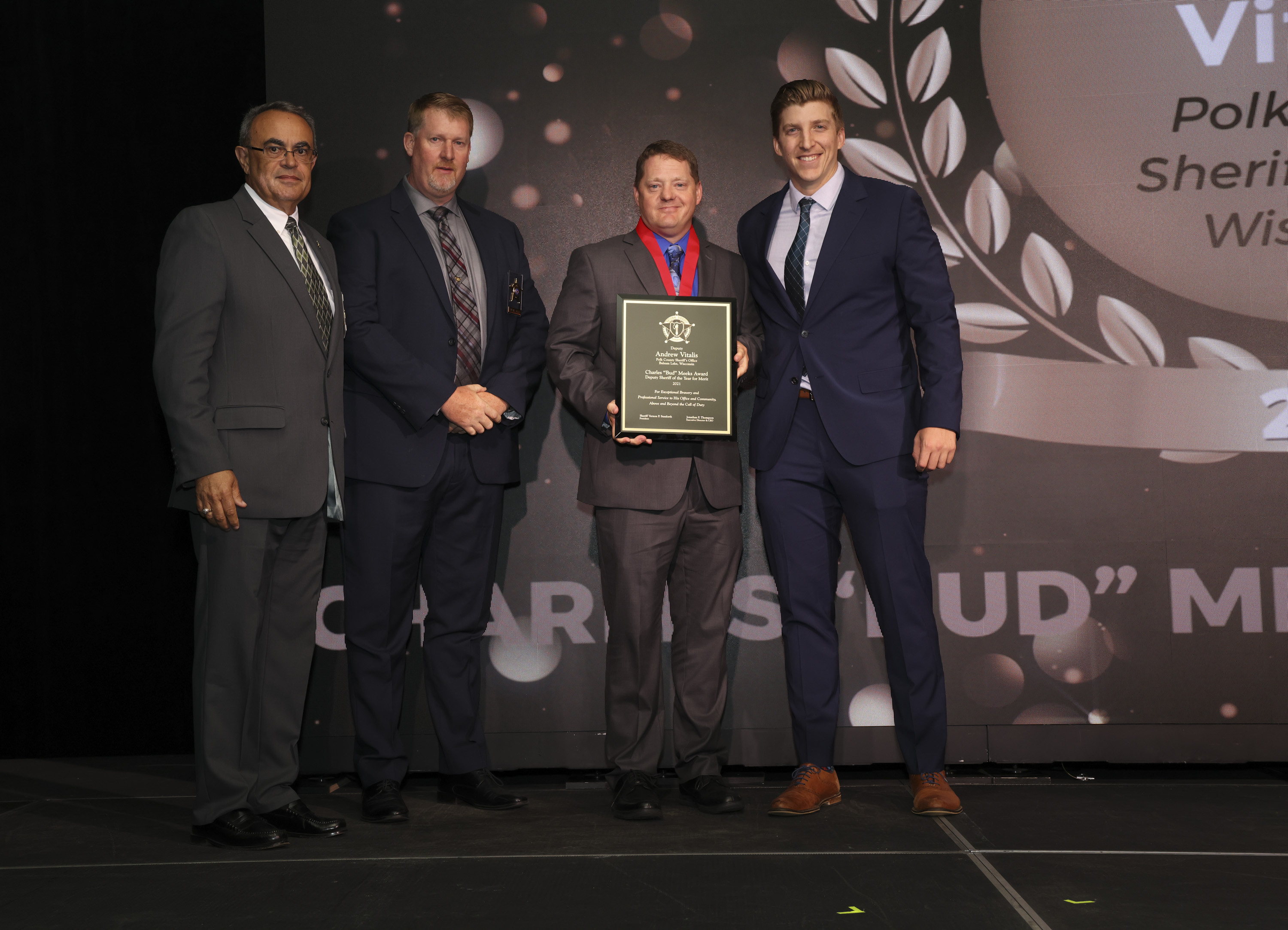 I am nominating Deputy Andrew Vitalis for the Charles "Bud" Meeks award for Deputy Sheriff of the Year-Merit for his work in solving a cold case through innovation. Back in January of 2014, (7 years ago) Polk County had a double fatality hit-and-run incident at the Round Lake Community. Round Lake is the Native American reservation within Polk County. Two men, Richard Cobenais and Benjamin Juarez were struck and killed. The suspect vehicle was a ford F-150. Since 2014, Deputies and Tribal Police worked constantly trying to locate and identify the person responsible for this tragedy. In January of 2020, Deputy Vitalis, who is assigned to investigations, came up with the idea to produce a video to release to the media and social media outlets profiling this case. To capture the raw emotions of the victims’ families. Investigator Vitalis hoped to bring more attention to this case and cast a wider net beyond our local media. Investigator Vitalis has a background in news media, previously working in California for a major news outlet.

Polk County Sheriff's Office along with the St. Croix tribal police split the bill to hire a producer to assist in making the video. Investigator Vitalis spent hours shooting and editing this video. Vitalis is the narrator in the video. I will attach a link at the end to view this final product.

A press conference at the end of January 2020 was set up and we had all the Minneapolis news outlets come up to cover this story. We had family members of the victims present to meet with those new networks. We got our message out to a large area. Polk County is in Wisconsin but is a border county to Minnesota. We are only 45 minutes from Minneapolis, MN.

In September, a tip came in that the person responsible had confided in someone that he saw this news story and it has been bothering him. Our plea for humanity had worked. Investigator Vitalis and our team of investigators ran down this lead. Spending time living out of a hotel on the road in an area south of the metro, about 1.5 hours from Polk County, Vitalis had identified the driver of the vehicle that struck and killed the victims. Vitalis located a witness that was a passenger in the vehicle. He also tracked down the actual vehicle that was used in this tragic case. On October 21st, an arrest of the suspect was made. Vitalis got to share this news later in the afternoon on the 21st with the victims’ families; this is a moment I will never forget in my career. To see the emotion and reaction for these loved ones was so powerful.

On October 22nd, a press conference to share our great news occurred. This showed the community that law enforcement never gives up. Vitalis's efforts to solve this case built a stronger relationship with the community and tribal law enforcement. The healing process for the victims’ families and our community could begin.

For Investigator Vitalis's perseverance and innovation to produce the video that moved this case forward, I nominate him for Deputy Sheriff of the Year, Merit.